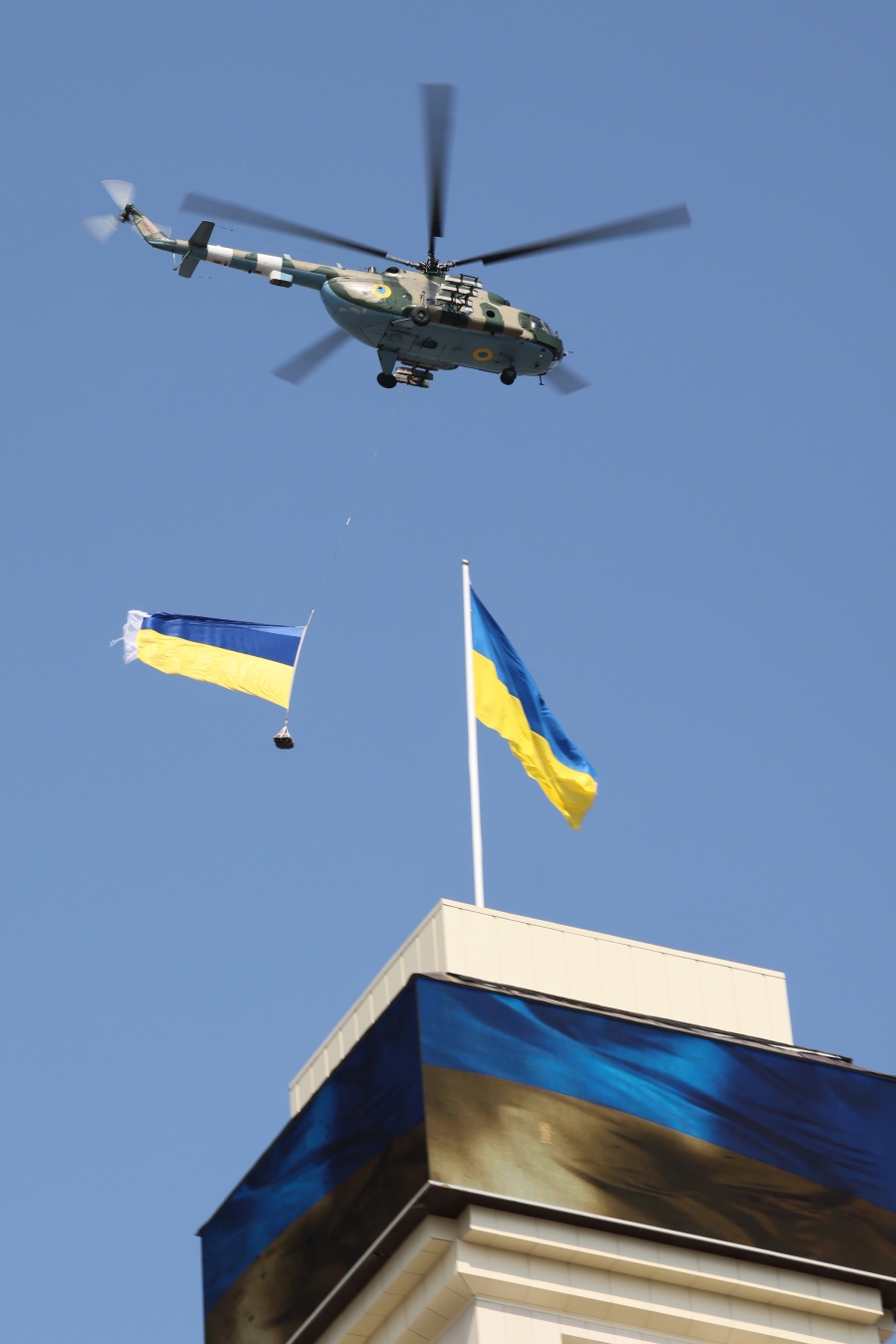 Some people say that fighting out of your skin is not really brave if there is no alternative. Perhaps. In Ukraine’s case it is magnificent all the same. Faced with Russian invading forces at least twice their size, and more now being drafted in by Moscow, the Ukrainians are fighting the Russians to something close to a standstill, at least for now. It may be a temporary respite as Kiev, finally, becomes surrounded. But the Ukrainians have lived to fight another day. They have certainly earned it.

In an article on 10th March we outlined how the Russian offensive had effectively stalled. Here, Michael Clarke looks at the other side of the equation; thinking about the reasons for the current success of Ukraine’s armed forces.

There are many factors, other than the poor showing of Russian forces in this war, that help account for the military successes of the Ukrainians.

The single most important factor – so clear it hardly needs further analysis – is the moral component of Ukrainian resistance. As Oliver Cromwell famously expressed it: ‘Men must know what they fight for, and love what they know’. The comment is apt in every respect to Ukraine’s predicament; fighting a war for survival against outright aggression. It’s a mirror image of what Russian troops probably know and love. And moral leadership has come from President Zelensky at the very top. Perhaps it is not surprising that a comic actor, who knows a thing or two about playing an audience, can embody one of the supreme skills of a political leader – expressing in plain words what citizens feel but may struggle to articulate. Like Churchill in 1940, he has made his own life, his own survival, synonymous with that of Ukraine itself.

Such leadership has facilitated a second factor in Ukraine’s performance; its impressive defence in depth. As Russian forces are finding out the hard way, the Ukrainians are not foolish enough to stand on a single line, but to hold in the cities and counter-attack against vulnerable logistical points. Their campaigns have bought the cities more time to make themselves into fortresses – in Odessa, in Dnipro and, most obviously in Kiev. If and when Ukrainian forces are overwhelmed by superior Russian firepower and numbers their formed units can melt into the 25 territorial brigades established across all 25 regions of the country.

These territorial brigades are not merely amateurs with their Molotov cocktails, though there is an impressive core of determined amateurs among them. But Ukraine’s reserve forces officially number 900,000, at least 300,000 of whom have had some contemporary battle experience in the Donbass war which has rumbled on since 2014. These brigades have a lot more than just a sprinkling of hard-won combat training. Most mid- to senior- Russian commanders have certainly had experience campaigning in Syria and some of them in Chechnya. But virtually none of the private soldiers in Russian forces, and certainly none of the 25% of one-year conscripts, will have had any battle experience at all. If the Ukrainian army cracks under overwhelming pressure, it won’t collapse; it will fall back into the territorial brigades and pose new challenges to the invaders.

Before that happens, the Ukrainians are already enjoying the natural advantages of the defender – knowing the geography of their own country, falling back on their own lines of supply and communication, working within completely supportive local communities. They have everything denied to the invaders, whose task gets harder the further away they go from their start lines. By 13th March it was independently recorded that Russian forces had lost 1,117 pieces of significant battle hardware among its ground forces – tanks, armoured vehicles, engineering vehicles, artillery pieces and so on – as compared to 305 corresponding pieces among Ukrainian forces. We might expect an attacking force, against an organised defending force, to lose more equipment as it presses forward. But accounting for 73% of all the equipment losses in the war so far is probably not what Russian commanders bargained for. And 57% of those Russian losses have been recorded as ‘abandoned’ or ‘captured’ equipment – evidence of poor maintenance and/or effective Ukrainian counter-attacks, where Russian troops have simply had to abandon or give up their heavy metal.

Rebuilding from the Ground Up

Then too, we must credit Ukrainian forces – and their foreign advisers and trainers, like the British – with excellent understanding of what they really needed as they recovered from the collapse in 2014 when Crimea was annexed. Not for them the shiny hardware and glamorous top-of-the-range aircraft so beloved of our Gulf allies. The Ukrainian army re-built itself from the ground up and concentrated on the basics – command, communications, operational efficiency, essential infantry ‘drills and skills’, with a force structure and equipment appropriate to fight a defensive war within its own territory. It had not got round to developing a fully appropriate navy for the Black Sea, but inside six years Ukraine’s ground and air forces were redesigned to be flexible and efficient enough to defend the territory of the country against anything other than an overwhelming invasion. The contrast with the centralised and inflexible Russian ground forces over the first 18 days of the war has been very noticeable. The raid of Ukrainian marines on the airstrip outside Mykolaiv that destroyed in minutes some 30 Russian helicopters, or the ambush of hapless Russian tanks and their command vehicle at Brovery, near Kiev, were both classic examples of the difference between the two forces.

Another factor is the quiet effort that Ukraine’s forces put into preparing for an invasion when it became at least a plausible – if not the most likely – eventuality as Russian forces built up around Ukraine in late 2021. While Ukrainian politicians tried to avoid self-fulfilling prophecies by playing down the looming danger, Ukrainian commanders were working out how and when to blow the bridges, where to pre-position troops and vital equipment and how to get as many specialists trained as possible on the air defence and anti-tank weapons they knew they would need. They were certainly grateful for all the equipment and training they were receiving early on from the US and Britain.

The Elixir of Good Intelligence

Ukrainian forces have also been the unique beneficiaries of the best and most detailed intelligence the US and Britain could give them. By December 2021 both intelligence communities had become convinced that full-scale invasion was a growing possibility. It was not a popular political line to take, but the Langley/Cheltenham network was proved right in almost every detail and continues to anticipate the Kremlin’s every manoeuvre. In the build-up to the invasion, for example, the RAF’s RC-135 ‘Rivet Joint’ surveillance aircraft, based at Waddington, were flying up and down the Ukrainian-Belarusian border (with full permission from Kiev) gathering electronic intelligence, intercepting communications, listening to Russian soldiers’ phone calls home and to each other. Since 24th February, they have continued to do the same on the NATO sides of the war’s borders without now operating directly inside Ukrainian airspace. All NATO’s aerial intelligence, in fact, is now operating at full stretch to reach into the battle area and surrounding territories of NATO members.

But Ukrainian intelligence seems to have gone beyond that. Unless they have been extremely lucky, Ukrainian commanders have displayed an uncanny ability to get their key people, aircraft and major assets out of the way before the Russians attacked them. Moscow’s early ‘shock and awe’ and ‘decapitation’ attacks in the first hours of the war had negligible effect – the Ukrainians simply weren’t there. One of Moscow’s key advantages was meant to be their Spetsnaz and related ‘fifth column’ forces who were embedded in Ukrainian cities and due to seize the government, grab key areas, kidnap critical officials, and engage in a good deal of sabotage. There were a number of shady street battles in the early days of the war as these groups were confronted, and some rough justice obviously occurred. (One of the negotiators Kiev sent to the tentative ‘talks’ at the Belarusian border – Denis Kireev, clearly seen in the press photographs – was subsequently accused of treason and apparently shot.)

But Russia’s pre-positioned special forces and Spetsnaz squads have had no discernible effect on the conflict. Kiev closed them all down within days. This may be because Ukrainian society is still intensely local in ways the Kremlin simply failed to understand. But it also suggests that Ukrainian security has penetrated Russian military planning – not the other way round. Some observers suspect that many in the Russian military are less than loyal to this operation and that a number of individuals have given the Ukrainians interesting information.

The Most Appropriate Weapons

Not least, Ukraine has been given the best of the most appropriate weapons its western backers can offer – NLAW and Javelin anti-tank weapons, now the Starstreak anti-tank weapon, Patriot batteries and various makes of Stinger missile – the Man-Portable Air Defence (MANPADS) suite of technologies. The anti-tank missiles, in particular, are reported to have achieved a 90% hit rate – very high by most standards – and a tribute both the systems and the training and guts of the operators. Britain seems to have given its whole inventory of NLAW missiles to the Ukrainians and will doubtless be prepared to send more as it re-stocks with that, and other systems.

Russian aircraft have been flying low and mainly at night; evidence that they still fear Ukrainian air defences, and as of 13th March, the Ukrainian air force still had over 50 combat aircraft still operating. That, in itself, is remarkable since Russia has gone more than two weeks and still not established air superiority – one of the pre-requisites for a swift and effective operation on the ground. Russia seems unable to mount a consolidated air operation to give themselves any realistic air superiority. The longer they lack it, the more Russian forces will be hamstrung to make significant gains.

Of course, as Stalin famously said of armies, ‘quantity has a quality all of its own’. And what the Ukrainians have in quality, the Russians can ultimately match in sheer quantity as they denude more of their garrisons in Russia’s Far East, begin their new conscription draft period on 1st April, persuade Belarusian troops into the war – against their instincts, since widespread desertions are now reported in Belarus – and bring some of the most vicious militias and private armies operating in Syria and parts of Africa into the battle.

If the military equation remains a contest of quality against quantity, the latter will ultimately prevail since quantity can always be increased more easily than quality. But that is also a matter of political will on both sides. If the Ukrainian forces and the citizens who back it up can keep the Russian offensive effectively stalled outside Odessa, Dnipro, and in the suburbs of Kiev, they might hang on long enough for President Xi Jinping – already thoroughly alarmed by the turn of events – to tell Putin that it’s all over; that it has to stop. And if he says so to Moscow, it probably will. The Russian armed forces will feel humiliated. But many among them might also be relieved.

Michael Clarke is former Director General of the Royal United Services Institute. His latest book, with Helen Ramscar, is Britain’s Persuaders: Soft Power in a Hard World, London, I. B. Tauris /Bloomsbury, 2021.